Wineries located on the Golden Mile Bench wine growing area near Oliver in British Columbia have submitted a proposal to become the first official sub-DVA "Designated Viticultural Area" of the Okanagan Valley DVA. An in-depth scientific analysis by scientists from Agriculture and Agri-Food Canada, Pacific Agri-Food Research Centre – Summerland (AAFC-PARC Summerland) has shown the area has a combination of landform, landscape position, mesoclimate, air drainage and soil materials that make it distinct within the Okanagan Valley, contributing to the production of unique wines. 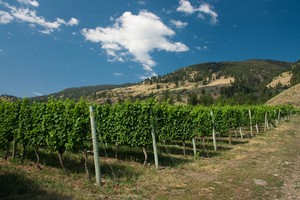 A group of producers in the area have been exploring the concept of proposing a Golden Mile Bench DVA since 2009. After much discussion, debate and an in-depth study of the region's terroir by Scott Smith, M.Sc. Soil Scientist with AAFC-PARC Summerland in conjunction with Dr. Pat Bowen, Ph.D. Research Scientist, Viticulture and Plant Physiology also at AAFC-PARC Summerland, the final boundaries were decided. Wine consultant, Rhys Pender MW of Wine Plus+ helped to compile the proposal.

With the Okanagan Valley DVA comprising around four-fifths of all British Columbia's vineyard area, yet producing wines from many different mesoclimates and terroirs, it is a widely held belief that there is a need to break this large, single appellation into meaningful, scientifically unique sub-DVAs that produce distinctive wines. Golden Mile Bench is the first such application to the BC Wine Authority.

The proposal was submitted to the BC Wine Authority (BCWA) on May 20th. The BCWA will conduct consultations within the region and a vote by ballot amongst the relevant stakeholders within the proposed region's boundaries. Once the due diligence has been completed the BCWA will submit the proposal to the Minister for approval.

Any enquiries about the status of the proposal should be directed to the BC Wine Authority (http://www.bcvqa.ca).

A question and answer section with more details is included below.

When will the Golden Mile Bench DVA become official?
The proposal has been submitted to the BC Wine Authority who conduct the process as laid out in the Wines of Marked Quality Regulation before submitting the proposal to the Minister for approval. There is currently no existing time estimate.

Who conducted the scientific study to determine the proposed boundaries?
The boundaries were decided after in-depth analysis by Scott Smith, a soil scientist with the Pacific Agri - Food Research Centre (PARC) in Summerland in conjunction with Dr. Pat Bowen, a Viticulture Research Scientist also at PARC.

Will there be more sub-DVAs created in the near future?
All those involved hope that this will be the start of creating a number of scientifically defined unique sub-DVAs that help tell the story of the unique regions of the Okanagan Valley.

What does a sub-DVA mean and how will it appear on labels?
When a sub-DVA is created, it applies to all of the vineyards within the defined boundaries. Any winery (not just those located in the sub-DVA) making wine from grapes grown within the sub-DVA could use the name  “Golden Mile Bench” on the label of that particular wine.

Commenting has been turned off.