Tinhorn Creek Vineyards celebrates their 20th anniversary this year, so come and kick off your shoes and join in the party as they are bringing back some of their favourite bands from past Canadian Concert Series. The much-anticipated annual event is a rare opportunity to see some of Canada’s top musical talent while enjoying award-winning wines and taking in the spectacular views of the South Okanagan Valley. 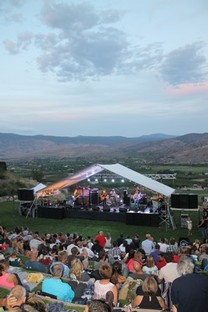 Tinhorn Creek’s outdoor amphitheatre sits atop the winery’s hillside overlooking the famed Golden Mile, and is a one-of-a-kind venue for dancing the night away under the stars. Kicking off on May 24th, the 2014 Canadian Concert Series features Tinhorn's favourite past performers every month and ends with legendary guitarist and singer-songwriter Colin James for the grand finale performance on September 6th.

The Town Pants are the first blast from the past and they will be starting the Canadian Concert Series with their rollicking Celtic rhythms on May 24th ($25) and the party continues with the funky grooves of The Boom Booms on June 28th ($30). On July 26th Hey Ocean ($40) bring their mellow indie party-pop to the vineyard, followed by the alternative rock music of Odds on August 23rd ($45).

Colin James returns to Tinhorn Creek on September 6th ($75) to celebrate their 20th anniversary, it's a special visit for the singer-songwriter as he helped the vineyards to celebrate their 10th anniversary a decade ago. He brings back his unique blend of musical styles that are the result of a long career that has seen him as rock guitar legend, platinum pop artist, blues baby and swing music band leader.

Tickets to the Canadian Concert Series are now on sale and are some of the most sought-after in the South Okanagan and beyond. Seasons tickets are just $115—see the first four concerts in the series for the price of three—and include a complimentary Go Vino stemless plastic wine glass. Tickets for the Grand Finale concert featuring Colin James are $75. All concerts start at 7pm (gates open at 6:30pm).

Shuttles from Osoyoos and Pentiction (return) are available for all concerts. Seating is limited for the shuttles so book early. Purchase

site de rencontre Suisse gratuit
@ Jan 16, 2015 at 1:54 AM
http://sitedeplanq.info/
Hello there, just became aware of your blog through Google, and found that it's truly informative. I'm gonna watch out for brussels. I will be grateful if you continue this in future. A lot of people will be benefited from your writing. Cheers!

Arden
@ Jan 18, 2015 at 8:39 PM
http://plansculs.info/
Hi there to all, how is everything, I think every one is getting more from this website, and your views are pleasant in favor of new users.

annonces coquines gratuites
@ Jan 20, 2015 at 4:42 PM
http://annoncecoquinefr.info/
Thanks , I have recently been searching for information approximately this topic for a while and yours is the greatest I've discovered so far. However, what about the conclusion? Are you sure in regards to the source?
Commenting has been turned off.