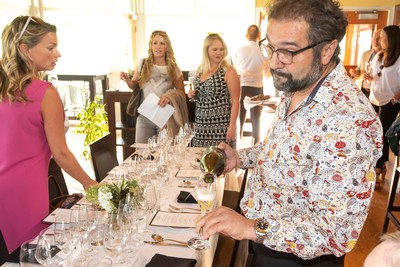 In 2010, Manuel Ferreira partnered with Tinhorn Creek to launch Miradoro Restaurant. He’s one of British Columbia’s most experienced and well-respected restaurateurs – but you can call him Manny. We do.

Manny grew up in Portugal and France, where food and wine are an integral part of daily life. Traditional European family culture meant taking the time to dine together and celebrate the local bounty.

Manny moved to Montreal in 1976 to pursue his education – not for anything restaurant related, but to study engineering. Two years later Manny’s love of hospitality called him to Vancouver where he worked with the Kanke restaurant group; first at Mulvaney’s, and later at The Cannery Seafood Restaurant.

In 1985, Manny joined Le Gavroche as manager; by 1990 he became a partner and as of 1994 he was the sole owner. Not bad for a kid who thought he wanted to be an engineer.

When Tinhorn Creek started looking for a partner to open the restaurant, Manny was a natural fit – the winery had a long and happy relationship with Le Gavroche. With his Vancouver successes under his belt, Manny moved to the Okanagan for his idea of retirement: running an award-winning restaurant.

On any given night you can find Manny in the front of house – seating guests, checking on orders, or getting that extra wineglass for you. He’s just as likely to be recommending the perfect wine to match your meal, as he is to be clearing a table. Look for him: he’s the quiet man with kind eyes, a warm smile, and really nice shoes.